One of the most interesting things that came up in our interview with Dylan Cole was the difference between concept art and production design.

As we explained in this post, the production designer basically bridges the worlds of concept art and movie production. Or, to put it another way, they take charge of translating the artist’s vision into an actual movie set. 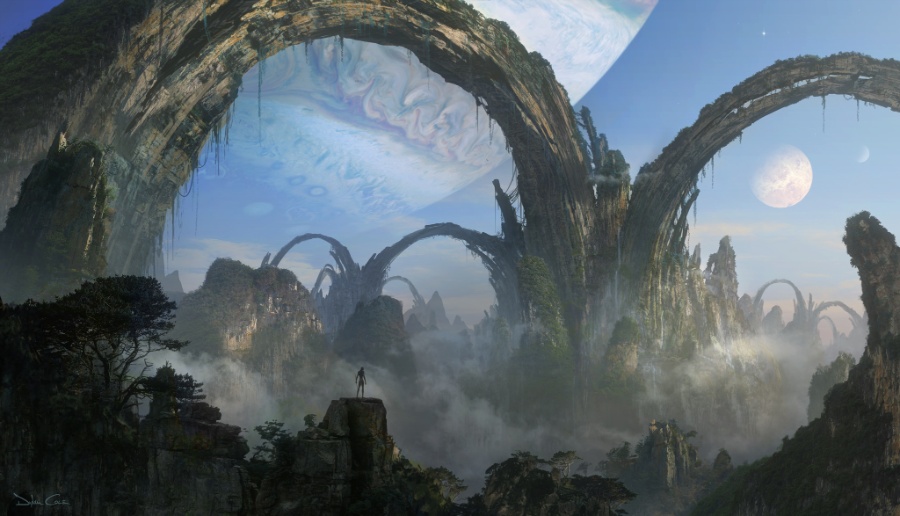 However, what about a film like Avatar, where the entire world is made of computer graphics? Surely, once you reach a certain level of pixelated detail, the art is the set… isn’t it?

It’s certainly true that almost everything in a movie like Avatar is, barring actors, created in CG. But a virtual set is so much MORE than just a big painting.

Dylan is perhaps the perfect person to explain this.

Earlier in his career he worked as a matte painter and concept artist, on movies like The Lord of the Rings: The Return of the King. He then transitioned to production designer, winning a Directors Guild of America Award for his work on Avatar.

Here, in his own words, he explains what this change in job role meant:

“The transition has been interesting for me personally, because coming from a matte painter to a concept artist, your role is your painting, right? The be-all and end-all is creating a good painting. As production designer, a good painting is nice but what you really need is a great set. That's what ultimately you'll end up seeing on screen. So letting go of that, it's like: ‘Okay, it's great that I've composed this painting that I'm all in love with - the lighting and all that stuff. But it doesn't matter if it doesn't work as a set.”

But why should a great painting fail to work as a set? It might be, suggests Dylan:

“Because if you turn the camera right, it doesn't work. Or if you move the camera, it doesn't work. It might be too big. It might be compositionally really neat but you realize that, ‘Oh, there's just a giant, open, boring space with nothing for the characters to interact with.’ It might not have a good reverse. [It might be:] ‘That’s great that you have this angle, but what's behind it?’ There are many, many different things.”

In short, a set has to do a whole lot more than just sit there and look pretty: it’s a living, breathing environment that needs to interact with the camera, characters and action, naturally and effortlessly. It sometimes even becomes almost a character in its own right (rich, believable worlds like Avatar’s Pandora or Empire Strikes Back’s Hoth spring to mind.)

Dylan adds another difference between a painting and a virtual set… You can cheat with paintings.

Moving to the 3D of a virtual movie set, though, is something that takes place at different points in the process on different movies. Dylan reveals that on the Avatar sequels (he’s working on 2, 3 and 4 concurrently), it’s been incorporated right from the start. And that’s a growing trend taking place across the industry, he adds. In his words:

“We're trying to get into 3D as soon as possible on Avatar, even in rough blocking form, paint over, so we at least know that it's based on a real space, a real shape or something like that. More and more, design is starting in 3D and it's kind of sad because there's so many obviously amazing 2D illustrators and stuff. There will always be a place for that, but more and more 3D's becoming very valuable.”

That might all sound intimidating, and a lot of hard work. But alternatively it could - and I believe should - sound liberating, and an amazing opportunity.

While working as a concept artist or matte painter means you have an influence on the finished product... Production Design means you move into a far higher realm of creative possibility.

The chance not just to influence, but to a large extent determine the final look and feel of a movie, is the jewel in the crown of this exciting potential career path... and what could be a more fitting end goal for your creative abilities?